I love camping. Everything about it from sleeping under the stars to becoming completely filthy. When I say camping I don’t mean having an RV, TV, running water or a convenient bathroom…that is not camping. I’m talking about the camping where you need to pack enough food and water in advanced, you are sleeping in a tent on the hard ground, you are getting bitten by mosquitos (that part does suck), and cooking food in a fire pit- which somehow makes everything taste so much better. What I also love about camping is being able to explore someplace new, a wilderness that hasn’t been touched my buildings or technology. A place to get away.

That is exactly what I did last weekend. Got out of the city, and went to the middle of no where somewhere in Argentina, and found a somewhere along the river. The Paranacito river to be exact. My mom, her boyfriend and I left the city on Sunday, drove for an hour and a half, stopped at some stands along the highway, got some worms and coal (wanted fruit too but was way over priced,) and then found ourselves a nice little oasis campsite. We were driving through this rural swamp/dessert/farm land and manage to camp in a place right along the river with tons of trees and grass. Looked completely out of place, but became our perfect getaway. Once we found our spot, we got out, explored a little bit, and set up camp.

Red bridge we came over. Pedro excited setting up his gear. My mom & I. Free roaming pigs that would get into your garbage.

During the day we sadly did not catch any fish, and by the time it was dark it was surprisingly cold. We all huddled around our tiny camp fire, and I ended up going to bed pretty early just to get warm. The sunsets and dusk/dawn time though was amazing. I took about 100 photos of the landscape, so it was hard to narrow it down with which ones to put on here, but these are my top choices.

On the second day we were better with our fishing game. Pedro had me catching the small fish that hung out in the shallow part of the river to use as bate to catch the larger fish in the middle. I caught 5 in a row. Fast too. like pling, pling, pling, Pling, PLing!! (My mom captured these photos, but I have not seen them yet.) Pedro caught 2 fish, I only managed to capture one photo of that though. We also were hanging out with this nice couple that are apparently my mom and Pedros “camping friends.” They always meet up when going camping haha, but never have met outside of that. Well they were the ultimate fishers because they were catching fish left and right. Twice they caught an enormous fish, and both of them got away. Too bad.  What was really cool that I had never seen before, was they caught a huge eel! Thing was nasty looking, but it sure did taste good when we had it fried for dinner :p Oh and dinner that night consisted of all fried foods. French fries, beef milanesa, and the fried eel. Some of the photos you are about to see are a bit gross..but suck it up, it’s also cool. 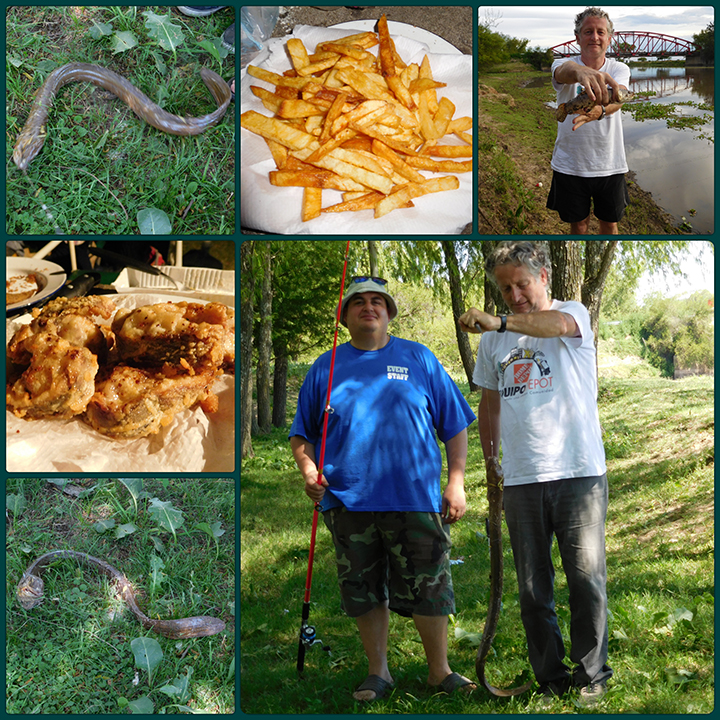 During the day my mom found this really cool lady bug that was not red..but yellow and green. I also took about 100 pictures of him, but will only show you the best.

What was great about the second night was that it was actually warm. I didn’t even need a sweater. Drinking a lot of wine might of also helped with that factor. And! there were fireflies everywhere. I had never encountered them before so I was entranced right away. Looking out into the field it looked like a ton of blinking/ glowing eyes. I roamed around for about an hour acting like a little kid, catching them and placing them in a bottle. I captured a video of this, which obviously isn’t the best because it was dark and it’s uneventful, but it gives you the idea of how damn cool it is that their bodies can light up like that. -well apparently this blog does not support videos..so I will have to work on that.

Well anyways that was my first camping experience in Argentina. Not a bad time at all. I cannot wait to keep exploring this country, and will keep you updated on it all. Now I am back in the bustling city, where people are going crazy because the new president just started his first day of work. Lets hope he makes some good changes-but I don’t like talking about politics, so thats all I’m going to say.