I don’t like eggplant. It is not so much the taste, it’s the texture. Just grosses me out. So what does my mom do? Buys 10 of them since they were ‘one sale.’ I’m like great, either we are eating two separate meals, or I will just have to buck up and eat them. Didn’t like either of these options, so I decided to transform them. This is one of the ways that I did. Milanesa Eggplant. For those of you that do not know what Milanesa is, it is a thin breaded piece of meat. It is a huge staple food here in Argentina. This turned out to be really yummy, and was super fast and easy.

Here is what you will need:

First lets start with the breadcrumbs. You can go out and buy an expensive tube at the store or…just make your own. This is what I did. I had made white bread a couple of days earlier and there was a little bit of the end left. So I put this through a food processor, added about 1 tbsp Oregano, ½ tbsp Garlic Powder, ½ tbsp Onion Powder, and salt. The amount of these ingredients is all up to you. You could even add chili powder of hot pepper flakes for a kick if interested.

Place crumbs on a baking sheet and pop them into the oven for about 5-7 min, stir, another 5-7 minutes until a nice golden brown. Not too dark, not too light. Let cool.

Now set up your assembly line: 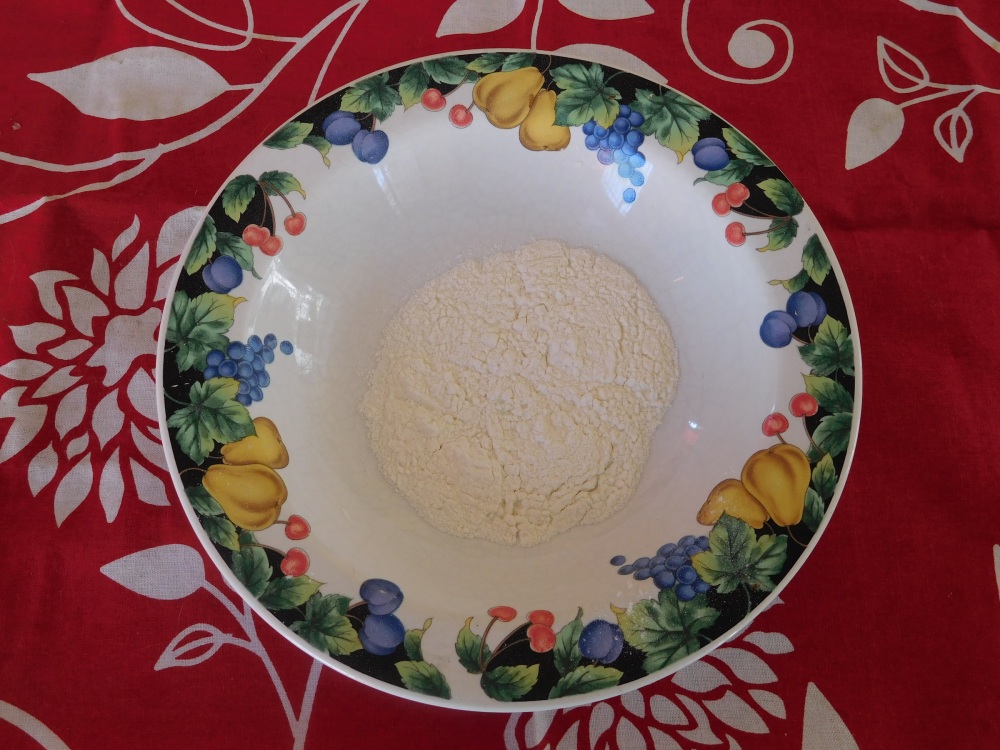 Bowl of Flour. I added some salt-optional.

Bowl of breadcrumbs (or tube if store bought.)

Sliced Eggplant. I sliced mine thin because like I said, I do not like eggplant, but if you do, feel free to slice them thicker. 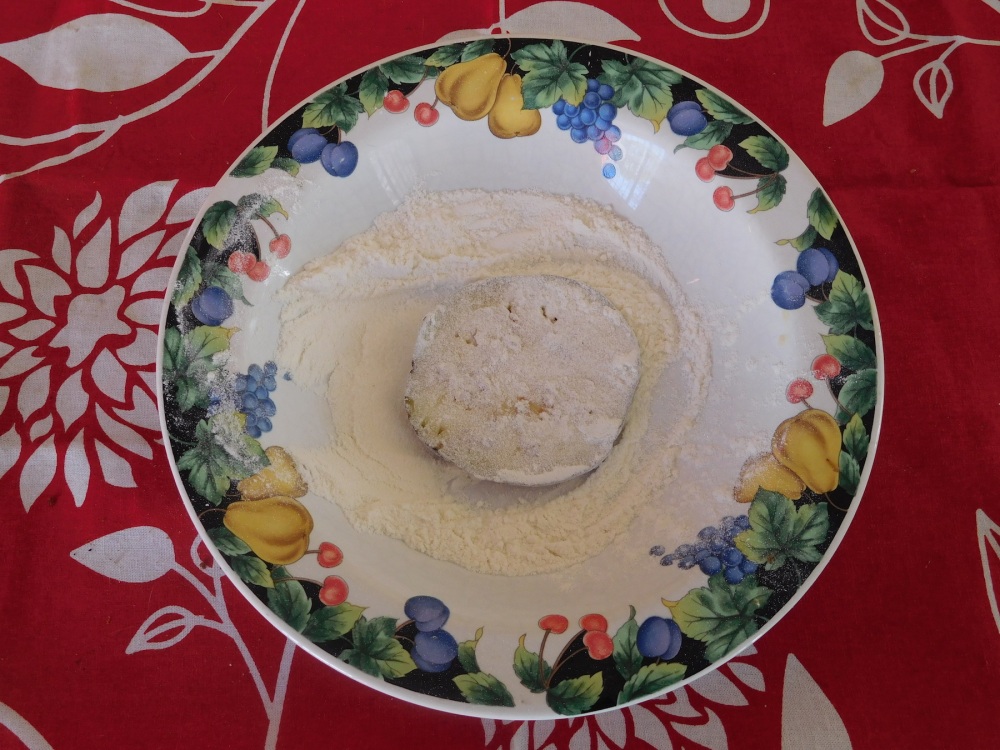 Now grab a slice, roll in the flour until covered.

Transfer to the eggs and soak completely.

Now in clean bowl pour some crumbs, then place eggplant on top.

Sprinkle some on top and pat down so they hold.

Flip and get whatever didn’t hold on the bottom. 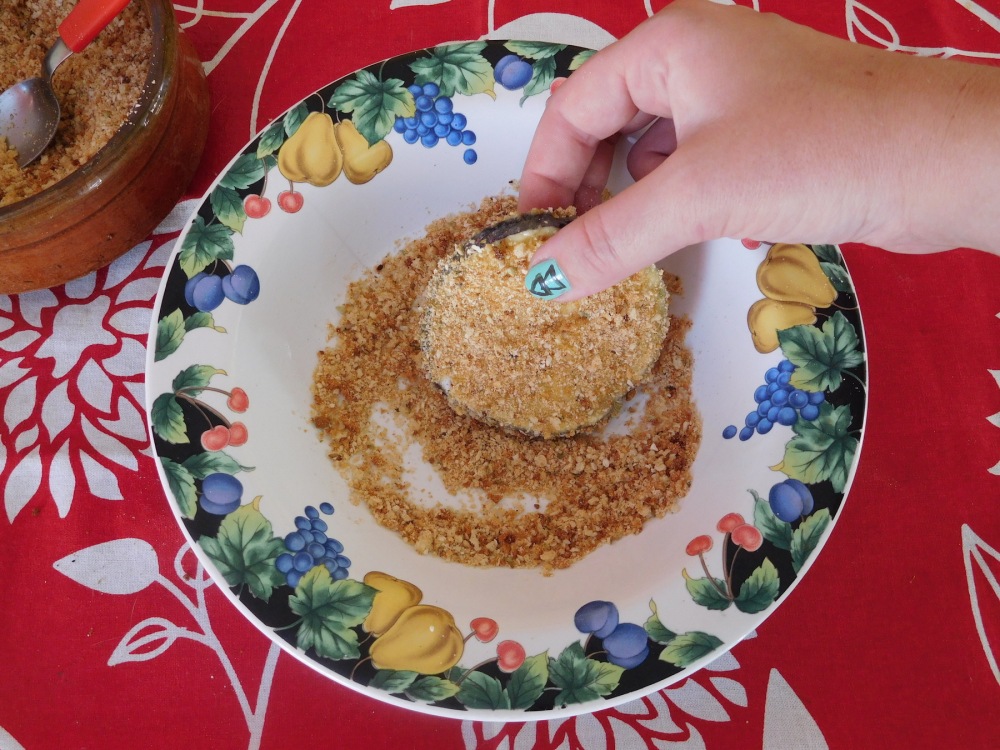 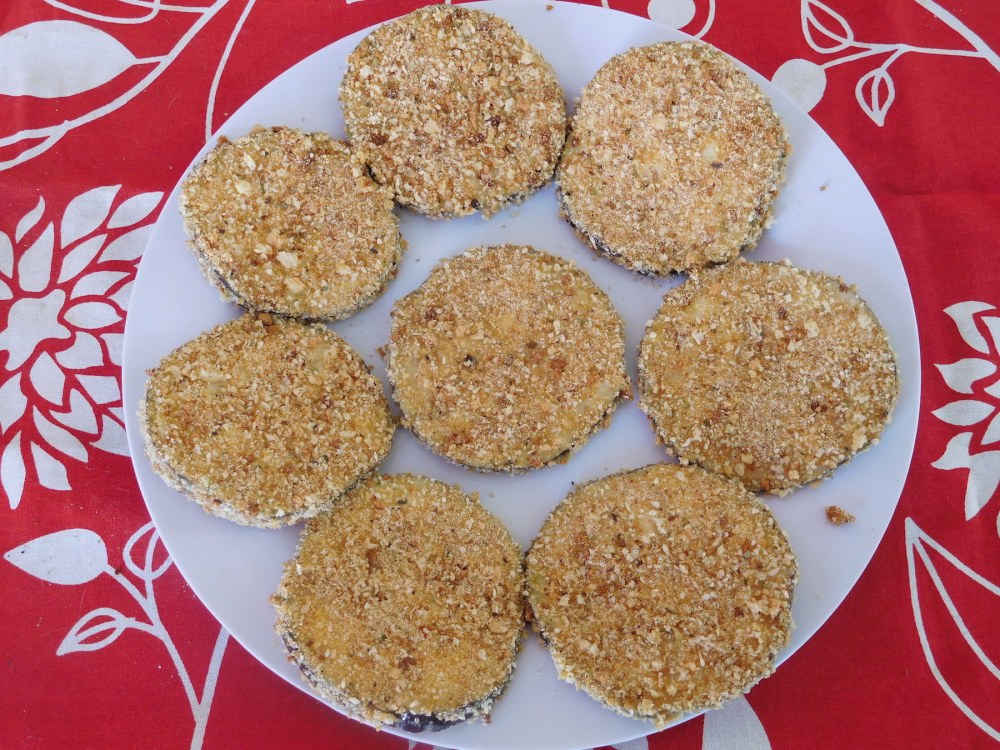 Repeat until you have finished all the slices. Replenish bowls along the way if necessary. If you have extra egg and crumbs, you can always double dip them, for extra crunch.

Place in fridge until ready to eat later.

When ready to eat, oil a baking sheet, place the eggplant evenly, and brush more oil on top. Cook at 350 for 15-20 minutes or until sizzling, slightly crunchy, and browned.

I am so bad at taking pictures of the end product; I just want to eat the food! But I had mine with a small salad and pumpkin mashed potatoes. (Yes I ate some of the salad already. There was more.)

They turned out really good, and yes I would eat them again.

Curious what I did with the other eggplants??

For one I made eggplant meatballs.

I brought these to a party, and they were gone in the first 10 minutes. I was originally planning to have them be put with pasta, but the ladies just wanted to eat them as is… So whatever works haha.

For another eggplant I made Empanadas.

I diced the eggplant and in a pan with oil and water, added spices such as; garlic powder, onion powder, cumin, red pepper, salt and pepper. I added sautéed onions and just a little bit of cheese. Then stuffed them into some empanada shells and ate them 10 minutes later. My mom loved these, me not as much because it went back to the whole texture thing, but they were very flavorful.

Comment if you Love, Like or Hate them. Also feel free to add your own photos. Love to see everyone’s version.